I was born in a Midwestern suburb in the United States. I thought I was too cool for the suburbs and grew up dreaming of an independent, bohemian life in New York City. So I inevitably went to college in NYC. And then a grad school in NYC. And then spent a year of under-employment in NYC. I had a teaching degree and there was a hiring freeze for new teachers that made it impossible to get a real job started. My time in New York was everything that I had dreamed it would be: all types of culture, amazing food, interesting people, constant things to do. But it didn’t seem like I could ever truly get started on my career while the hiring freeze continued and I was beyond poor by that point. As much as it was the most amazing city ever, I needed a steady job more than I needed the city. 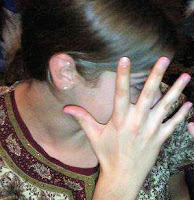 A friend from university was teaching in Abu Dhabi, UAE and suggested that I join her there. The pay was more than I would make in NYC, an apartment would be paid for, flights would be paid for, and I would be with one of my best friends. I was petrified at the idea of moving, to be honest, and had a very basic (i.e. nonexistent) image of Abu Dhabi. But I did it nonetheless.

That choice has set my life on a path that I never would have expected. I’ve been an expat for almost eight years now. I took a break from Abu Dhabi to follow my now-ex-husband to the Turkish Republic of Northern Cyprus, but that sucked and we moved back to Abu Dhabi after a year. Being an expat is a fascinating experience. I had a marriage to a Palestinian who never would have stepped foot in America and our paths never would have crossed. I’ve traveled to more countries than necessary and am far too used to living out of suitcases. I get crazy reverse culture shock when I step back on American soil.

But most of all, I’ve learned a lot. And I guess this blog is an attempt to share a fraction of what I gather along the way…